(But is it really considered crashing if you’re technically invited, but not on “the list”?)

When I was in L.A. last week for that event I told you about (which was kick-ass, by the way. I came home with pages of notes — not just great ideas, but real tangible stuff I’ve already begun putting into practice) I kind of crashed a celebrity event and got to meet a bunch of very cool entrepreneurs.

As an entrepreneur, it’s been my experience that the more connections you can make, the better off you’ll be. You just never know who you’ll meet, and who they’ll be connected to.

We were having a sushi dinner with a bunch of associates in L.A., and we struck up a conversation with 2 gals at the next table. (If you’ve ever been out to dinner with my husband Andy, you know this is not an uncommon occurrence.)

Turns out these 2 moms have turned a simple idea into a majorly profitable business. Bonbon Cupcakes might sound like a frou-frou name (although perfectly fitting for their product — girls’ microfiber tights trimmed in ruffly bows and wrapped up to look like a cupcake straight from your favorite local bakery) but these gals are serious about their business. 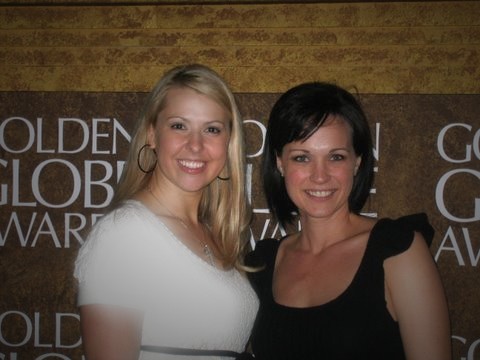 So serious in fact that in less than a year, they shifted from handmade items sold to friends and family to a full-scale operation with manufacturing ops in China. And now the celeb’s kids will be sporting these darling cupcakes…which is where I enter the story…

So these two part-time-entrepreneur/full-time-moms were telling us how they were invited to participate in a celebrity gifting event, in conjunction with the Golden Globe Awards.

Not too shabby indeed.

While they told us all about who they got to hobknob with at this event (see pix on their blog here) we were doubly impressed.

And that’s when they invited me to come check it out.

After all, it was literally one floor above the conference I was attending, in the same hotel. So it’s not like it was out of my way or anything!

OK, so I wasn’t on the list. Who cares? I’ve got confidence and that’s pretty much all it takes to effectively crash an event (you’ve seen “Wedding Crashers,” right?)

So of course I did.

Then I decided to walk around. I wasn’t specifically out to meet celebs (I’m SO bad with names anyway, I seriously doubt I would have known who I was looking at) or to score some free stuff (ok, maybe a little. Who doesn’t like cool free stuff?) but in all honesty, it was my first “crash” of any kind of event, so I was kind of excited.

The only famous person I saw was Joely Fisher (and someone had to tell me who she was) but I did get some cool stuff for my kids.

And just so I wasn’t completely out of place, I decided I needed a legitimate reason to be there.

So I figured I would interview some of these fine entrepreneurs for this very blog. You can read about “A Study of Entrepreneurs” by clicking here.

Previous
My Personal Epiphany around “Body”…from which you just might learn something valuable for YOU
Next
Entrepreneurs: A Study of Success

WAIT!! You're here for a reason. I'll bet something in your life is NOT flowing like you want it to, and I can help. They call me the Spiritual Ass Kicker because I totally kick ass at helping people just like you to get CLEAR. Let's get some quick clarity about what you want and what's in your way...and then we'll permanently clear those blocks, fears, doubts, and obstacles that are keeping you stuck. First things first - drop me a line via the contact form and I'll walk you through what's next.